By 2001, there had been the pressing need to create an organization that would unite all the scholarship alumni and address their problems, represent their interests at different levels of public institutions, and also channelize the Bolashakers' potential for the participation in discussing and solving crucial social issues. Thus, on March 31 2001, the initiative group of fellows created Association of Bolashak International Scholarship of the President of Kazakhstan. The organization claimed responsibility to protect the interests and rights of Bolashakers, unite them and pull them together under one wing. Implementing the strategy 'Kazakhstan-2030', ensuring succession of cadres, maintaining the traditions of the past through the creation and innovation have become the main principles of work. 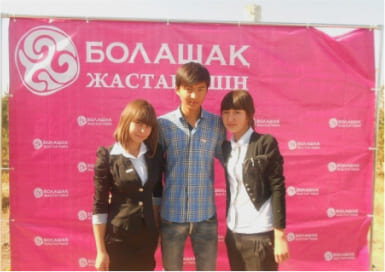 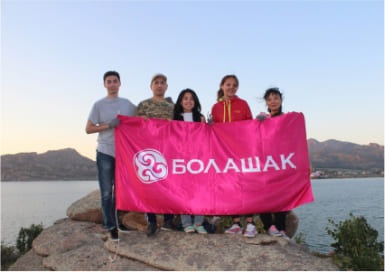 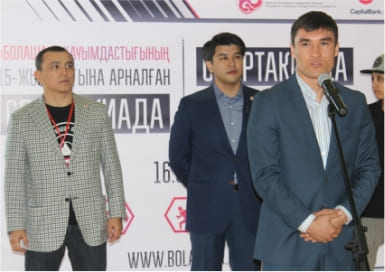 The first few years of the Association, when the culture of civil society was evolving, and the number of fellows had not reached hundreds, its activity was aimed at ideological consolidation of Bolashakers, institutional strengthening of the organization as a whole.

The national television channels "Khabar" and "El Arna" show a series of programs 'Bolashak - Education of the Future'. The project is aimed to inform Kazakhstan youth about the possibilities of international education and the formation of potential managerial elite for Kazakhstan.

The book about the Bolashak graduates and fellows, dedicated to the 10th anniversary of its existence, "10 years of Bolashak Scholarship" was published.

On December 15th, the First Congress of the Holders of the Bolashak International Scholarship of the President of the Republic of Kazakhstan took place.

On September 30th, the project ‘Bolashak is Our Contribution to the Country’ is implemented. The project is aimed to assist newly arrived Presidential scholarship graduates in employment, choosing professional occupation, as well as attracting candidates to participate in the Bolashak scholarship competition.

In honor of the Independence Day, On December 15th, the Association holds a republican student rally 'Kazakhstan Path - 15 Years of Independence'. 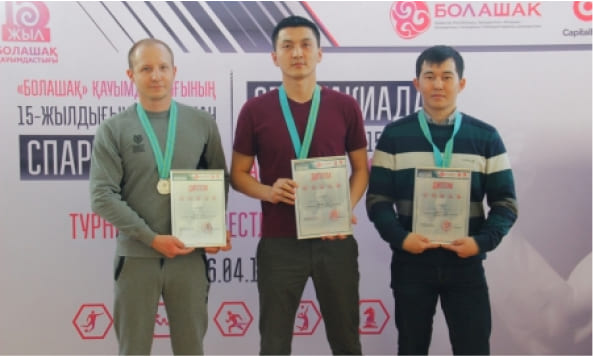 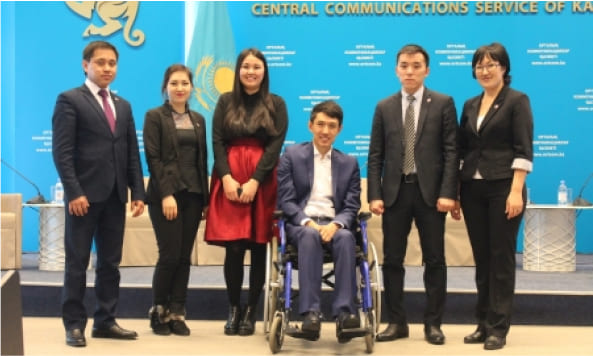 On January 30th, 2008, II Forum of Bolashak Scholarship Fellows featuring Kazakhstan President Nursultan Nazarbayev took place. This spectacular event was the turning point in the life of the scholarship. The President, speaking before Bolashakers, voices a large number of proposals for the high-quality expansion of Bolashak scholarship and the function of the Association. Thus, the Association is requested to: control the process of selecting candidates, consolidate the intellectual and organizational capacities of program graduates, create a web portal for sharing ideas, initiating wide-ranging discussions on important issues, supervise the fellows, be in charge of graduates' employment, transfer of Bolashakers' knowledge to Kazakhstan youth.

In the same year, the Expert Council was formed from among program graduates. It allows getting Bolashakers involved in discussing and formulating ways of addressing important state issues and tasks, including the national project 'Intellectual Nation 2020'.

In honor of the 15th anniversary of the scholarship, the photo book "15 years of Bolashak Scholarship", where its graduates talked about studying abroad and shared thoughts about the future of Kazakhstan, is published.

At the same time, the Association conducts a research 'Entry of Kazakhstan into the 50 most competitive states: the view of Kazakhstanis".

In an open vote on November 15, 2008, the Chairman of the Board is elected. Bauyrzhan Baibek, 1994-1998 Bolashak fellow in the Federal Republic of Germany, becomes the Chairman. 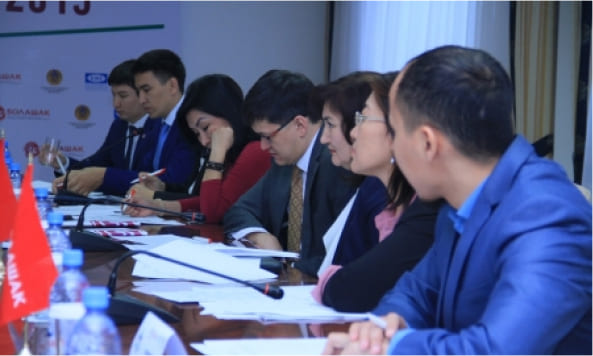 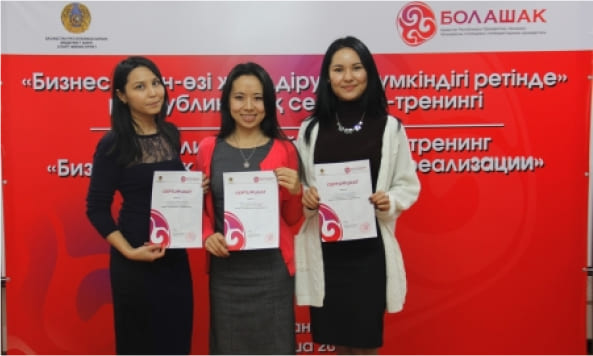 On December 6, the Charter of the Association is adopted by the General Meeting. Changes are made to the name of the organization: the word 'graduate' is changed to 'fellow'. Now, according the Charter, not only graduates, but also the Bolashak program fellows, as well as citizens of the Republic of Kazakhstan, who have contributed to the achievement of the core goals and objectives of the Association can become members of the public union. In addition, the Association introduces the principle of corporate governance: The Board of 16 members and the Executive Secretariat accountable to it are founded.

The Bolashak Association encourages society to pay more attention to charity. In June 2008, the organization takes patronage over Akkol orphanage #1 that has over two hundred children in the custody. Since then, Bolashakers have held various charitable activities aimed at the intellectual and creative development of its children. Thus, members of the Association annually congratulate the children from the orphanage on the New Year, Children Protection Day, and conduct educational workshops for orphans to raise personal culture, social adaptation and career guidance.

The Association members actively participate and initiate projects aimed at transfer of knowledge: projects such as 'Bolashak Stand for Quality Education' and 'Support the Library through Books' are implemented.

In the same year, the Association holds a series of round tables 'Kazakhstan Is the Land of Well-being and Peace' as part of the project 'Improvement of Youth Policy Development with the Participation of Youth in the Country and Abroad'.

As part of the republican program 'Zhastar - Otanga', the meeting of representatives of the Bolashak Association with the audience of the project 'Youth Talent Pool of Zhas Otan takes place. The meeting raises questions regarding the creation of single discussion platform for young leaders, training and promoting managers of new formation in government service and economy.

In September, the project 'Science Week of 'Bolashak Scholarship Graduates' is launched. As part of the project, Bolashakers start to conduct lectures and seminars in Kazakhstan universities.

In spring 2009, the website www.bolashak.kz is rebranded. The key modules of the portal include news feeds covering current events in the country and the world, articles by Bolashakers containing publications on youth, society, economics and politics, blogs of members of the Association, with the possibility of interactive discussions on the topics.

In the fall, members of the Association hold several meetings with youth in various regions of the country to clarify government policy and to collect information on youth issues. Round tables, lectures and discussions are held in Kostanay, Kyzylorda, Pavlodar, Taldykorgan, Petropavlovsk, Kokshetau, Ust-Kamenogorsk, Aktobe, Aktau, Atyrau and Uralsk. The meetings are designed to transfer knowledge and experience based on readiness to serve the motherland, the nation, honesty, honor, generosity, knowledge transfer, development of human capital and intellectual nation. Also, thanks to the lectures, wide information campaign to promote the Address, clarify the anti-crisis measures of the Government of the Republic of Kazakhstan, takes place. The event is attended by more than 18 600 people. The Association in the regions was represented by the Bolashak graduates: Bauyrzhan Baibek, Dauren Toleukhanov, Bolat Bersebayev, Yerlan Aukenov, Bakhyt Yessimov, Kanat Sarsembayev, Shukhrat Sadyrov, etc.

In the same year, the Association organizes the international education fair 'International Education 2009'.

In addition, representatives of the Association were experts at the International Youth Innovation Forum in Siberia 'Interra 2009' held on September 9-12 in the city of Novosibirsk, Russian Federation.

On September 24-25 in Chisinau, the Association participates in the IV Forum of Creative and Scientific Intelligentsia from the CIS member states that discussed the next year's program of science and innovation in the CIS.

The Association carries out active effort to maintain the feedback from the fellows. It creates a single automated database of graduates of the scholarship program and members of the Association, having been integrated into the portal www.bolashak.kz; it carries out monitoring and analysis of employment of scholarship graduates.

For the purpose of the effective employment of Bolashak graduates, during the period of crisis and stabilization measures being implemented, in November 2009, the Forum on the employment of Bolashak graduates 'Bolashak Graduate - 2009: Realizing the Potential' takes place. It was attended by over 500 Bolashak international scholarship graduates and fellows, more than 80 employers, and there were 1500 accepted resumes. Following the Forum, the next month saw 25% of graduates, who had attended the event, having been employed.

In the same year, permanent call-center is established in order to support graduates, fellows, as well as prospective students on various matters related to Bolashak scholarship. Thus, more than three hundred young people receive advice and answers to their questions. The center works to this day; you can ask questions by phone in Astana at 707-669.

The result of the efforts leads to the republican award 'Zhastar' received by the Association for its contribution to the development of youth policy of the country as the 'Best Youth Organization'.

Also, the Association intensifies its efforts to bring to the organization not only scholarship holders, but also all talented and patriotic young people who have contributed to the development of the country.

On March 11, an exhibition-auction of fine art works by orphanage children 'The World That I See Is the Life Where I Create' is held. There were about 70 paintings exhibited; the funds raised during the exhibition and auction were handed over personally to each child from the orphanage. Subsequently, the Association becomes an active participant in charity events of the capital. Thus, we provided informational support for the charity concert 'In the Name of Life' held on August 12 at the Palace of Peace and Reconciliation in order to collect funds for the expensive operation of severely ill girl.

On March 13, the Association of Holders of Bolashak International Scholarship of the President of the Republic of Kazakhstan conducts a simultaneous game for young players with international grandmaster and world chess champion among young people, Darmen Sadvakassov, at the Intellectual School of the First President of the Republic of Kazakhstan with focus on physics and mathematics.

Also, in the same year, the Bolashak Association, Zhas Otan, and the Ministry of Education and Science of the Republic of Kazakhstan jointly implement the project 'Youth Talent Pool' (YTP). YTP is the republican database of professionals, motivated by career development with a high level of professional skills and managerial competencies. The goal of the project is to implement the processes of talent pool development for the system of public administration, business and political spheres.

From October 12 to November 25, as part of one of the main activities of the Association - knowledge transfer and creation of conditions for the formation of intellectual nation of Kazakhstan, the Association implements the republican project 'Bolashak Zhastar Ushіn'. It represents a series of workshops on industrial-innovative development and mechanisms for its implementation. The seminars were held in six cities of Kazakhstan: Almaty, Shymkent, Ust-Kamenogorsk, Uralsk, Kokshetau and Astana.

December 6 in Almaty and December 10 in Astana see the occurrence of the third Alumni Forum 'Bolashak-2010: Realizing the Potential', which bring together heads of central governments, deputy oblast akims, who oversee the implementation of the program of forced industrial-innovative development in the regions, heads of national and private companies, and around 500 Bolashakers.

The Bolashak program has become one of the main identifying factors of 'Kazakhstan way' while forming human capacity of the country. The program alumni have been actively involved in all vital processes of the state and society. For all of us, it is important that potential, energy, optimism and knowledge of future graduates are not wasted, and are focused on the development of Kazakhstan. The Association of Holders of Bolashak International Scholarship of the President of the Republic of Kazakhstan Bolashak will put up efforts for this!

Make your personal contribution to the history of the Association and the country as well!